What the $50m BuzzFeed investment says about the modern-day media

What started out eight years ago as a hub of cat videos, listicles, trivia, gifs and quizzes has recently been valued at $850m (£506m) following a $50m investment from a US firm.

Californian venture capital firm Andreessen Horowitz has given BuzzFeed a pivotal boost in the form of a $50m (£30m) investment, which now values the internet sensation at more than three times as much as the Washington Post. The firm’s investment in the site has grown from their prediction that BuzzFeed is set to become a top-level digital company. 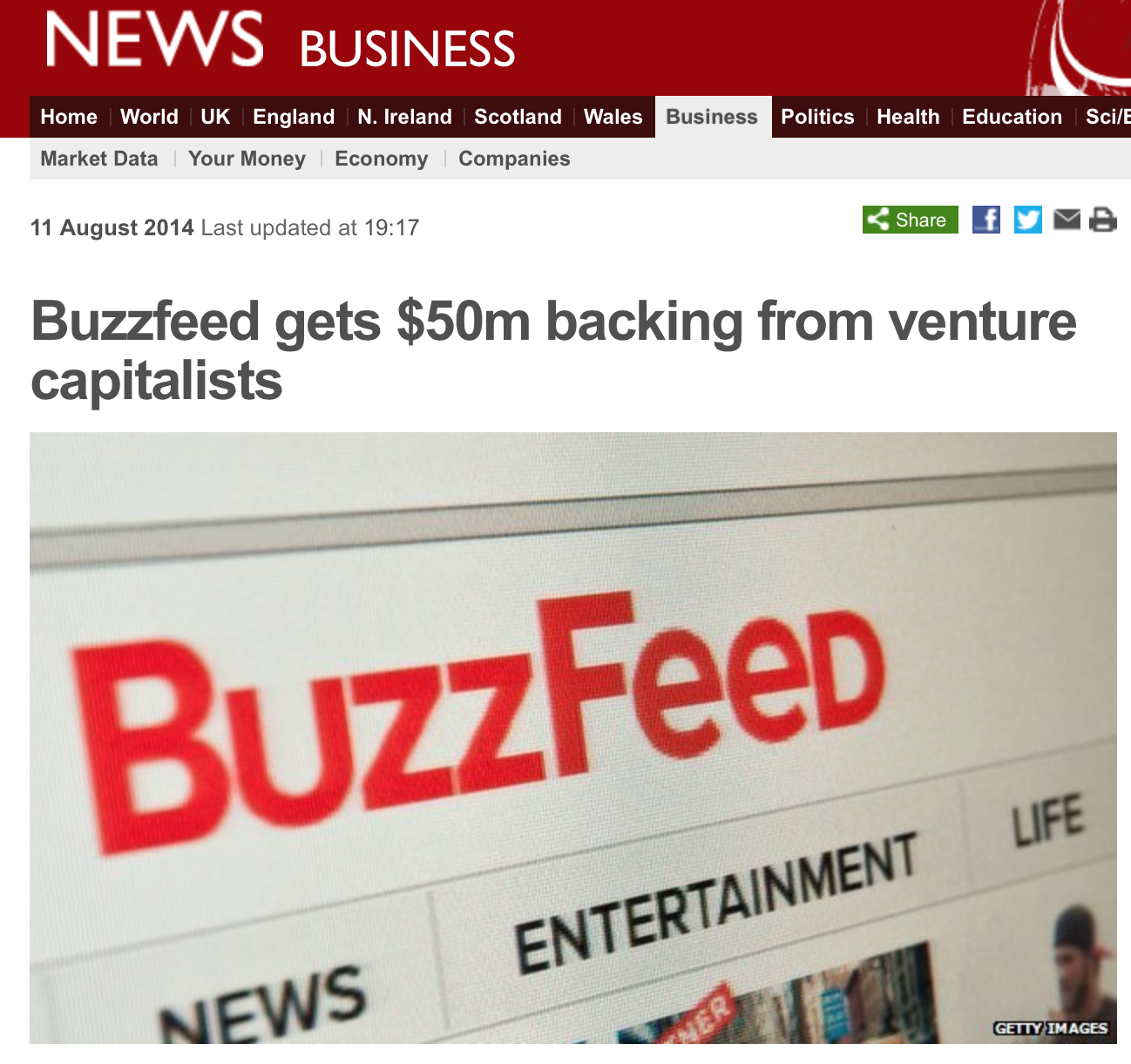 News of the investment was released on Monday

The funding signals another push in the direction of online media and confirms much of what we already know about the digital shift. The advent of digital journalism is well and truly underway and print is fast becoming a sinking ship. While newspapers are sure to become a dot on the horizon in the next few decades, websites, blogs and social media outlets are the new kid on the media block- and they’re here to stay.

BuzzFeed is one of the most renowned websites for capitalising on the digital shift. Although the website has recently hauled in hundreds new recruits in an attempt to report on mainstream news and features (politics, the Ebola outbreak, the Gaza conflict) it’s best known for creating breezy content that’s sharable across online platforms. 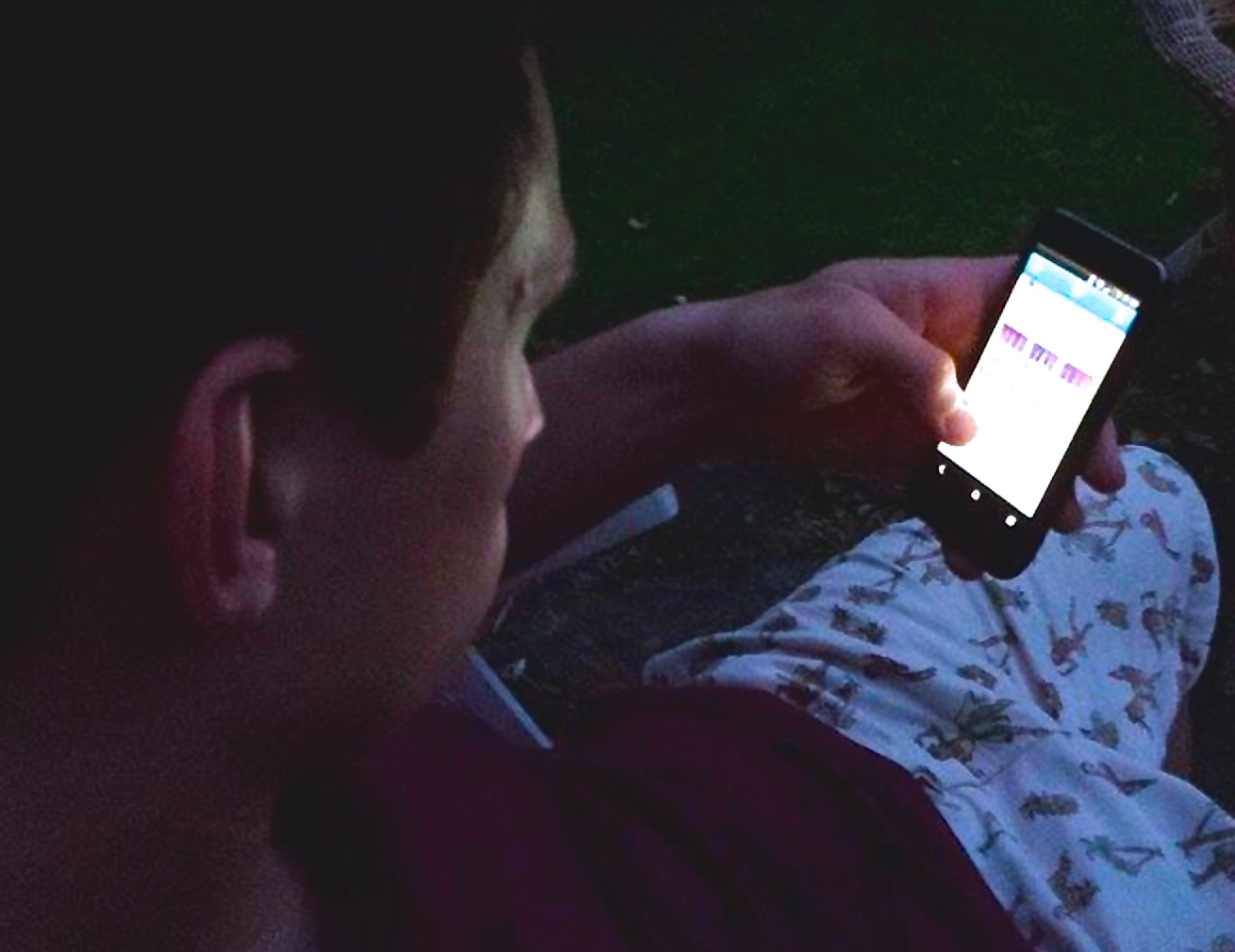 Many of my Facebook friends and Twitter followers share BuzzFeed articles on a daily basis. They’re often posted with a reluctant disclosure that ‘I don’t normally share BuzzFeed stuff, but…’ and ‘This is probably a bit kitsch but I couldn’t resist sharing…’ followed by a listicle that glamourises, romantises, humourises or victimises the daily struggles and predicaments of a particular subgroup. Take, for example, ’27 Incredibly Annoying Things People Do To Bartenders’. It’s irresistible clickbait for anyone, anywhere who has ever worked behind a bar and prompts numerous discussions about which number made them laugh, which number reminded them of that hellish Valentine’s Day shift in 2008 and which number was so accurate they had to copy and paste the link and re-post the article themselves.

These articles typify many aspects of digital media and the kinds of things that consumers want to see when they browse online. Aside From A Questionable Tolerance Of BuzzFeed’s Tendency To Capitalise Their Every Headline (each to their own) the rise of BuzzFeed confirms our thirst for sharable, easily digestable, succinct, delightful, humourous, day-enhancing material. We also seem to like multi-media platforms that combine gifs, photos and videos with listicles, quizzes and articles. (BuzzFeed’s ‘Trending’ bar consists entirely of captionless photos.)

But I can’t ignore the fact that a website that has a ‘LOL Feed’, a ‘Cute Feed’, an ‘OMG Feed’ and a ‘WTF Feed’ is being dubbed as the next big thing on the media scene. I don’t doubt that BuzzFeed deserves such a title- it has, after all, successfully tapped into digital trends and consumer demands- but I worry about what the potential accession of BuzzFeed as a dominant media company says about the nature of our consumer demands in the first place.

Articles such as ’Weird Little Things All Couples Do’, ’23 Things Women Are Tired of Hearing’ and ‘21 Celebrities Who Prove Glasses Make Women Look Super Hot’- besides demonstrating a short-sighted willingness to tarring all couples and all women with the same brush- are simply self-justifying articles that social media users can regurgitate to legitimise how they’re feeling at any given moment. It’s closed-minded material that tells specific subgroups how to feel about other subgroups, and it’s not open for discussion.

Then there’s the fact that listicles go against every English student grain of my being. BuzzFeed is like a giant slap in the face to everything I was taught at A-Level: it’s taking the numbered paragraph plan from my notes and forgetting to bother with the final product. Writing a listicle is much easier than crafting a nuanced, comprehensive, articulate, well-structured column consisting of those long-forgotten things we call ‘paragraphs’.

But BuzzFeed is capable of winning over even the most orthodox among us. As a travel writer, ‘16 Encounters That Prove The World Is Smaller Than You Think’ totally got me clicking. As a cat-lover, I’m also lured in by ’13 Iconic Movies Improved By Cats’ and as a feminist, I really enjoyed ’18 Inventions By Women That Changed The World’. BuzzFeed has tapped into the likes and dislikes of just about anyone and is writing irresistibly light-hearted entertainment pieces that resonate perceptively with those interests.

We’re yet to find out whether the venture capital investment will bear fruit and BuzzFeed will become the website to reign over all. Perhaps if BuzzFeed is going to rise above conventional media companies it’ll have to ditch its associations with listicles anyway. But here’s a thought for the meantime: indulging in a listicle is great, every now and then, so long as it doesn’t replace an ability to read and write insightful, challenging and cutting-edge debates that don’t start every new point with a number. Call me a traditionalist, but I like to dream that the light-hearted side of the digital shift can move forward without casting a shadow on our good-old friend, quality.

Couch-potato altruism and the #nomakeupselfie

As an exchange student from England, I’m often reminded just how far I am from home when I log into Facebook. Recently, my news feed was infiltrated by endless amounts of ‘#nomakeupselfies’, the latest internet sensation to sweep across the UK. It wasn’t until I mentioned it to my American friends that I realized the campaign hadn’t made it across the pond.

The #nomakeupselfie craze began in defense of actress Kim Novak, whose looks were criticized at the Oscars. Women and girls all over the nation began ‘baring all’ by taking a selfie without wearing make-up, and posting it to social media sites such as Facebook and Twitter.

Since then, the trend turned epidemic. Taking what is now known as a #nomakeupselfie became connected to raising awareness of breast cancer, and female Facebook users would take a selfie of themselves without their slap on, and nominate their girlfriends to do the same, writing hashtags like ‘#breastcancer’ ‘#awareness’ and of course ‘#nomakeupselfie’ alongside their snap.

Then came the onslaught of virulent criticism and debate. Selfies would be accompanied by hundreds of Facebook comments in which users would exhaust the question: how does taking a #nomakeupselfie add anything to fighting cancer? Feminists everywhere (myself included) were rolling their eyes and scratching their heads in sheer bewilderment that taking a picture of one’s self without wearing foundation was considered to be a courageous pledge to the dark fight against cancer.

The loosely based visual metaphor of ‘baring all’ for breast cancer awareness did nothing to add to cancer research. As convenient as it is to pretend that you’re doing your bit by taking a natural selfie, cancer research needs cold hard cash in order to make progress.

As a woman, I found the epidemic to be highly insulting. Not only did it turn charity into self-indulgence- a transparent probe for compliments about one’s appearance over Facebook- but it sent out a damaging message about women. The trend made it clear that many women see wearing make-up like breathing air, and that giving it up for the sake of a picture was like making a dramatic sacrifice. Basing the selfie trend around make-up also eliminated roughly half the population and isolated women with an association to surface-level values. What’s more, connecting cosmetics to cancer is as insulting and degrading to women as it is to cancer patients themselves.

Thankfully, the weak and self-indulgent gesture of taking a natural selfie was soon vindicated by monetary donations. Selfies are now accompanied by screenshot evidence that the nominee had donated £3 to Cancer Research UK by texting ‘BEAT’ to 70099. Within 24 hours, the internet sensation raised £1 million for CRUK. Now, that astonishing figure has reached £8 million. What began as an individualistic, half-hearted attempt to ‘raise awareness’ of one of the most widespread forms of cancer became an inspiring lesson that taught us of the wonders that can be achieved when fundraising via social media outlets.

Unfortunately, the trend appears to be dying down. The money raised from the #nomakeupselife campaign has reaped the benefits of technological fundraising, because like all internet phenomenons, it went ‘viral’. But, like all internet sensations of the same nature, such as Gangnam Style and The Harlem Shake- (remember those?) they always die out. Sadly, cancer hasn’t.

So while we can take a positive message from the story of the #nomakeupselfie and the way that it morphed, we must not forget about the danger of relying on technology in the name of raising money for charities.

Technology allows us to dip in and out of fundraising from the comfort of our couches. Donating a couple of quid on JustGiving or taking a #nomakeupselfie quickly became the standard means by which altruism is converted into money. But altruism must not lose touch of its original cause and become a hedonistic hobby of the middle-class. While couch-potato altruism is an effective way to raise awareness and money on rainy days, it must not become the only way that humanitarianism is transformed into money. The ‘old fashioned’ methods of philanthropy like dancing for 24 hours straight, volunteering in a soup kitchen, or running a 10K must not be pushed off the shelf in favour of disconnected, remote and dispassionate forms of fundraising.

To find out more or to donate to CRUK, follow this link: