“Freedom is blogging in your underwear”

During Spring Break, I took the opportunity to visit one of the most historic and political destinations in the USA. I bypassed the alluring Florida sunshine in favour of a cultural stay in Washington DC.

As a history student, walking around such a legendary place brought some of my favourite parts of the past to life, landmark by stunning landmark. It is very interesting when you get to know new places, or visit those where you have already been, but with a changed outlook (due to studies or events). And therefore, colliding with a cultural center, from your paradigm you perceive a certain place in a different way than you could before. You can refer to Top-Papers.com if you are interested in the topic of rethinking Institutions, by specialty. 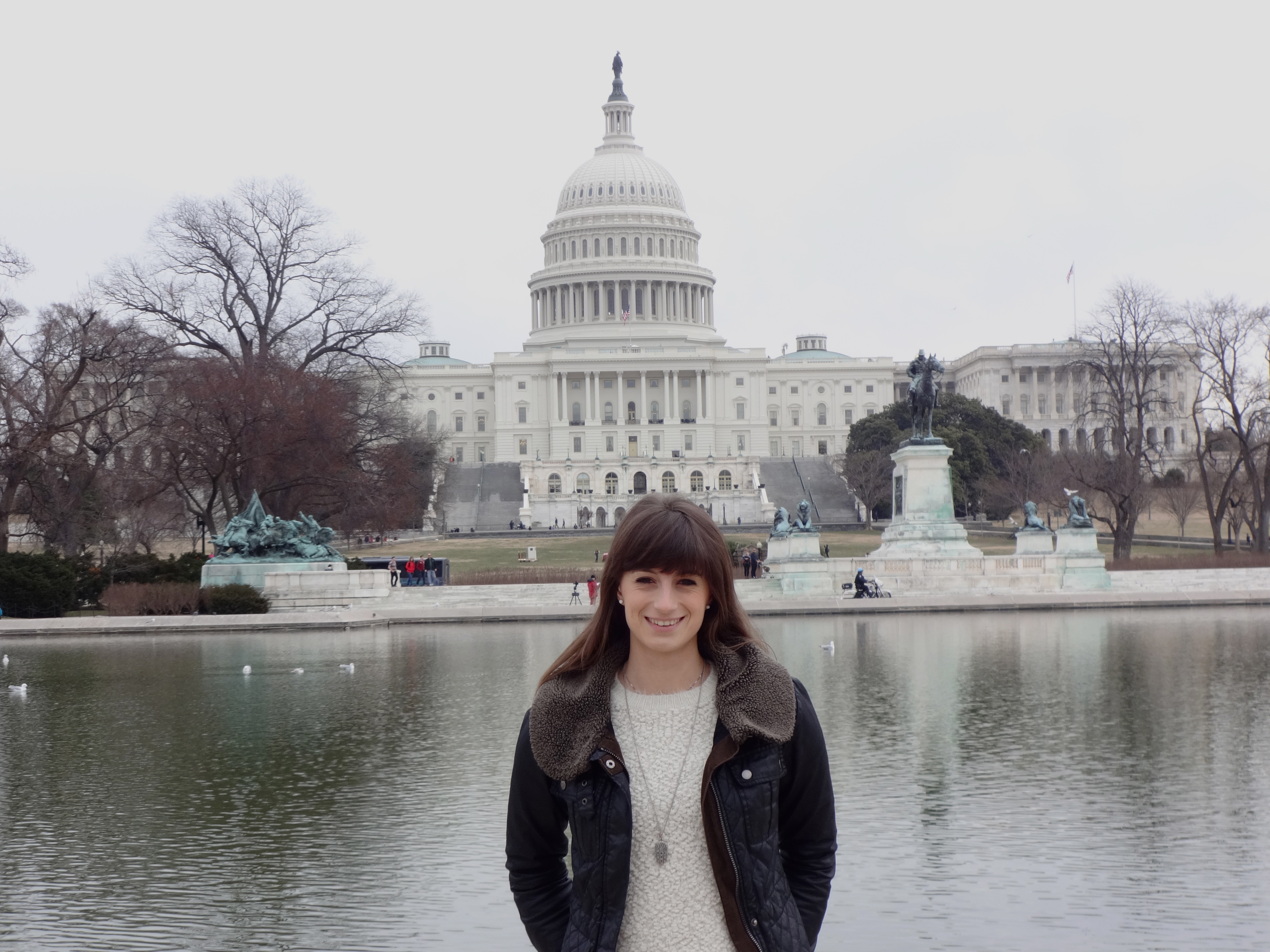 Much to my surprise, the place I visited that moved me the most was not the Lincoln memorial or the White house, but the gargantuan, seven-level interactive museum on Pennsylvania Avenue. What can only be described as the ultimate mothership of news and journalism history, ‘Newseum’ reminded me of all the reasons why I want to pursue a career in journalism. It educated me, tested me, and I left after five hours- feeling exhausted- but totally inspired. 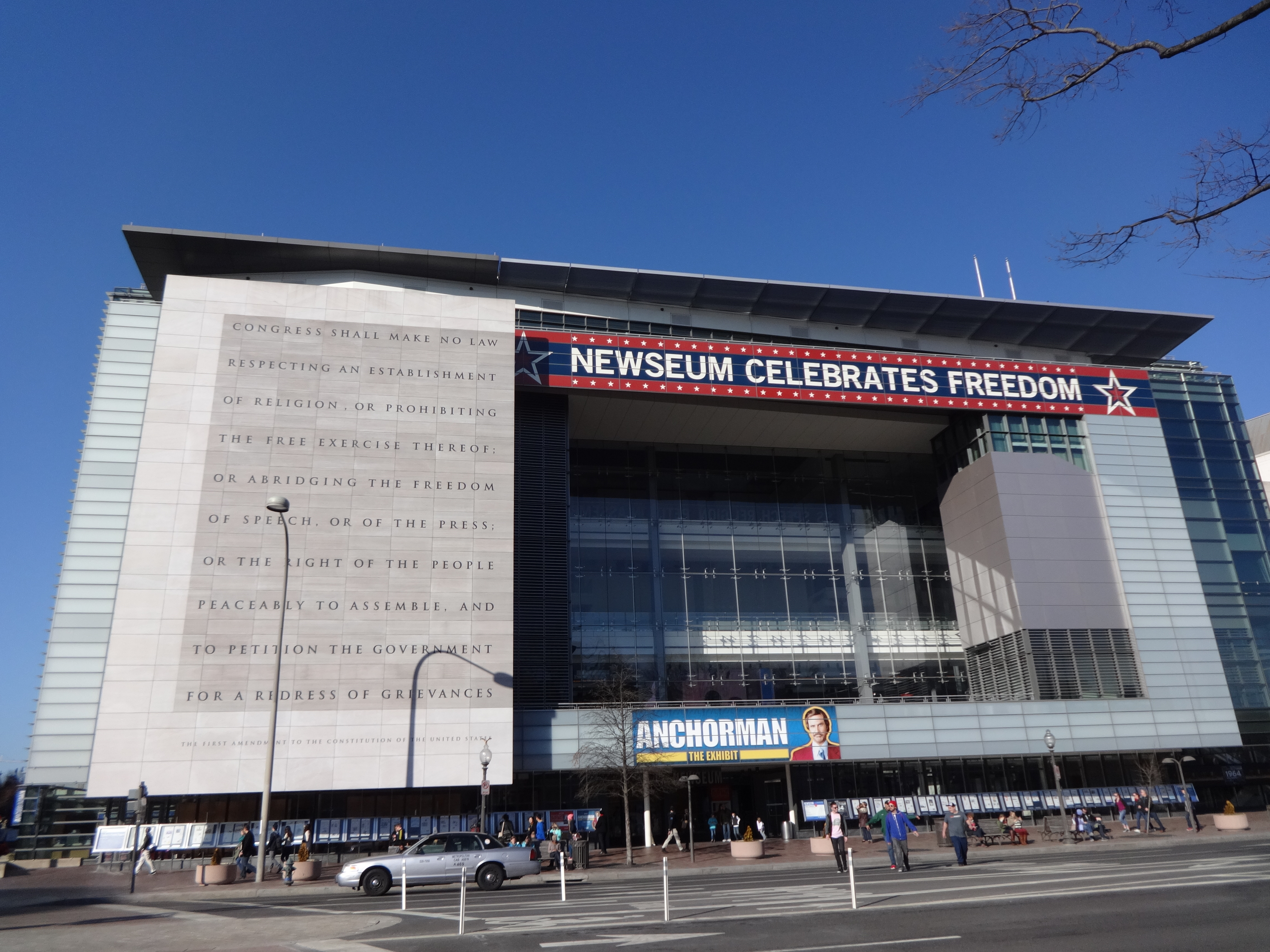 The museum is home to real sections of the Berlin Wall and evocative remains of the World Trade Center. It has an open terrace with stunning, unobstructed views of the Capitol building, and a 4D theatre that takes audiences on a journey through some of the most groundbreaking investigative reporting stories of all time. The infamous Anchorman Exhibition features props and costumes from the 2004 film and the interactive galleries challenge visitors to create a front page, present a news story in front of the camera and decide upon some of the most controversial reporting decisions in history.

Yet the reason I found Newseum so incredible was not because of its endless, expansive and informative galleries, but because the entire spectacle was in effect, a moving tribute to the First Amendment of the US Constitution.

The First Amendment prohibits the making of laws that breach freedom of religion, freedom of the press, freedom of speech, the right to petition and the right to peaceful protest. Newseum’s devotion to these rights is made clear before visitors even walk through the door, as the words of the amendment are carved into the building itself, next to an enormous banner that reads ‘NEWSEUM CELEBRATES FREEDOM.’

Having studied various aspects of American history during my year abroad, I have learned predominantly about the 13th, 14th, 15th and 19th amendments that infamously opened the gates of democracy to millions of citizens on the grounds of race and gender. Much less attention has been paid to the importance of the first amendment, which in the modern Western world, can be taken for granted on a daily basis.

As I walked around Newseum, I came across a world map that displayed the proportion of countries that practice the right to free press, those that are partially free, and those that are completely censored. I was immediately struck by the utter mass of countries labeled by the colours red and yellow, as opposed to Western territories that were depicted in democratic green. In the split second it took to cast my eyes over this map, I was reminded how comparatively lucky the Western world is to have the right to free press. 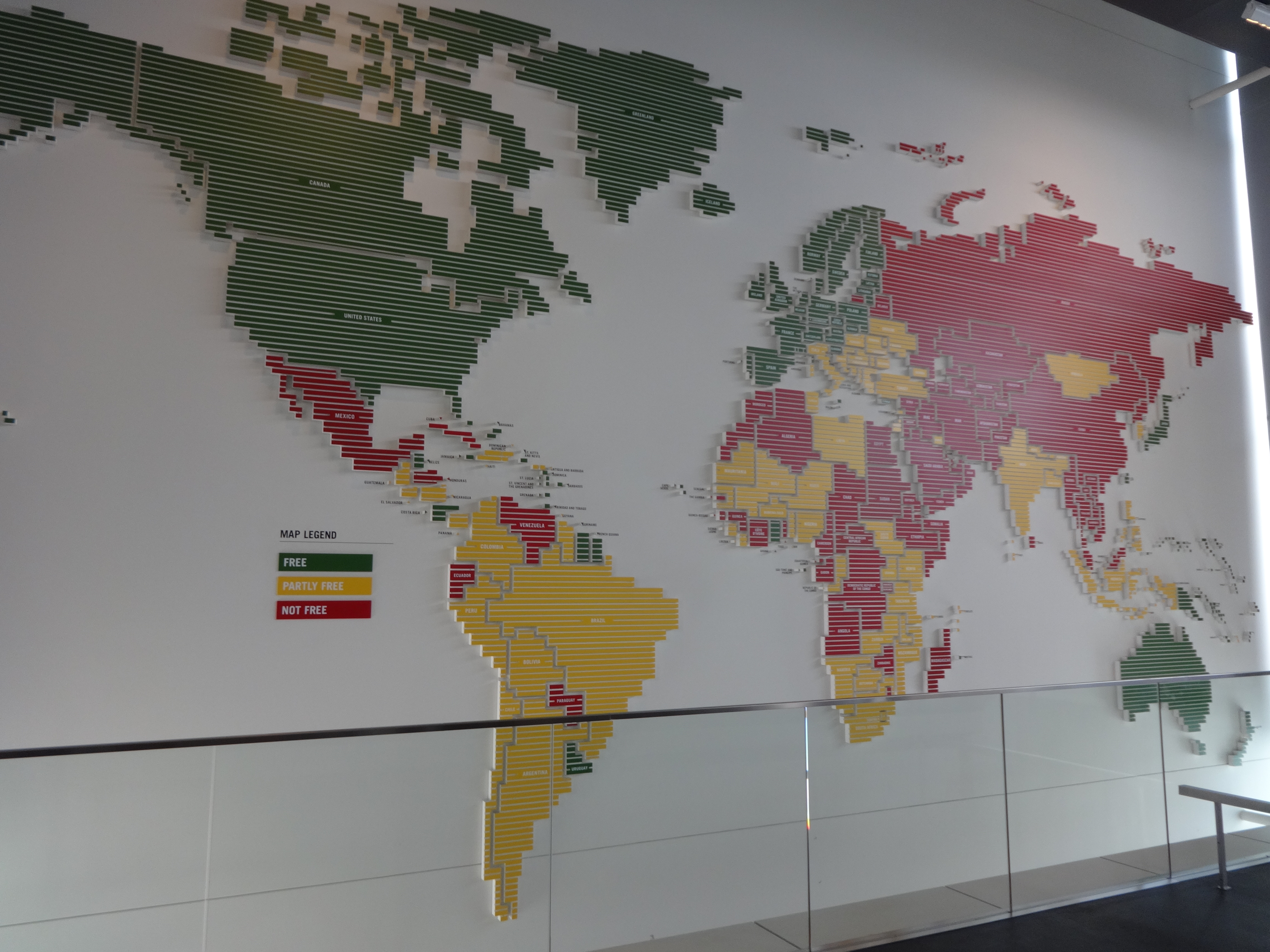 In light of recent global news, affecting testimonies to such rights could not be more topical. The Pussy Riot protests at Sochi, North Korea’s Crimes Against Humanity Report, ongoing turmoil in Syria and Russia’s dark assault against Ukraine show us how even in 2014, natural human rights are being engulfed by wicked tyranny.

Not only are millions of people in the East subject to violence and oppression each day, but the right of their countries to freely communicate about such disasters is censored.

By sharp contrast, I looked around the gift shop later on and smiled at a fridge magnet that read ‘Freedom is blogging in your underwear.’ Having the right to express myself freely through my blog and through newspaper columns is part of my identity. It gives me a voice, and a way to interact with the world. I could not imagine living in a country that did not grant me this right- something I have grown up with and never had to consider being eliminated.

Deciding what makes a story newsworthy must be judged by the concern of social urgency, human rights and democracy. Until censorship has been eliminated, journalists working with the right to free press must celebrate, relish and utilise the tenets of the first amendment in order to spread awareness of people whose natural human rights continue to be repressed by despotism.