About why it is so important to understand what positions feminism advocates, why it is necessary to follow its dogmas and why the modern world follows the equalization of rights, at https://writing-service.org/

Since moving to South Carolina I have had a feminist awakening. Taking a women’s history class and participating in a women’s rights seminar has opened my eyes to the realities of women’s issues and the importance of feminism in modern society. Living in the South has brought me face to face with real instances of sexism and discrimination, while the liberal and progressive atmosphere within USC has afforded me the opportunity to express my ideas and write about these experiences.

One thing I have learned a lot about is the dark reality of sexual assault and violence. On January 22nd 2014, President Obama signed a memorandum to establish the White House Task Force on Protecting Students from Sexual Assault, an effort to curb the number of sexual assaults on college campuses.  This came after a report from the White House Council on Women and Girls that stated the current sexual assault statistic for US college campuses is one in five.  The task force has 90 days to come up with ways for colleges and universities to establish procedures that will help decrease the bleak number of assaults currently occurring on campuses nationwide.

This semester, I am fortunate enough to have become involved in South Carolina’s longstanding effort to diminish this worrying statistic. Having enrolled for a Women’s Self Defense credit class over Christmas, I flew back to Columbia in January expecting an interesting and informative, but probably stereotypical self-defense experience.

Little did I know that spending 90 minutes in Blatt 308 every Thursday evening would change my life. Taking women’s self defense classes has been one of the most transformative experiences during my time spent studying abroad at USC. 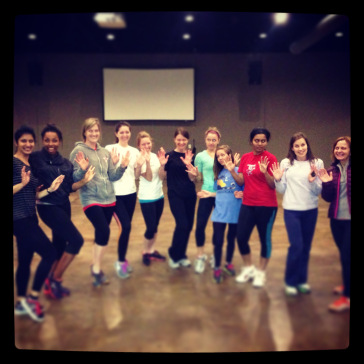 Dr. Ed Carney and Professor Shannon Henry from SASS (Surviving Assault and Standing Strong) train thousands of women in Richland and Lexington counties, including policewomen, SLED and SWAT teams and State Troopers. They teach the women’s self-defense classes at USC, and are two of only three SASS Certified instructors in the entire USA. Thanks to their expertise and training in the area, the state of South Carolina now has the highest percentage of women prepared for attacks in the nation.

By the end of the semester I will be able to defend myself against abduction, sexual assault, rape, violence, stalking and harassment. I will be trained to defend against choking, grabbing, ground fighting, multiple assailants and weapons.

Given that I have shocking upper body strength, sloth-like reflexes and a tendency to freeze in alarming situations, I almost can’t believe it myself.

Not only have my self-defense classes been transforming my physical alertness, awareness and preparedness for an attack, but they have also changed the way I see myself within the world around me.

Growing up with an older brother, I used to bemoan the cautionary warnings I was given before going out that didn’t seem to apply to him. I used to hear, “If someone looks sketchy, call me,” or “Keep an eye on your handbag in busy areas,” and “Text me before I go to bed to let me know what time you’ll be coming home.”

Thankfully, I have never been in any of the frightening or dangerous situations my parents warned me about. But there have been many times that I’ve been walking home at night or out on a run when the streetlights started to flicker and the traffic got quieter. Worst-case scenarios would pop into my head along with the distressing admission that if I was to be attacked or abducted at that moment, I would have been completely defenseless.

Learning self-defense maneuvers that are tailored to the kinesiological structure of women has begun to eliminate this fear. From now on, when I’m walking alone at night I will recite counter-attack sequences in my mind and always seek out the nearest escape route.

Self-defense has given my feminist awakening a strong bite. My belief that women are equal to men has now been fortified with a toolkit to defend against the unfortunate fact that some men chose to use their physical strength against women.

Self-defense has not taught me to be afraid of the world or to go looking for trouble. Rather, it has armed me with a weapon of my own- should I ever need it- that makes the world around me a safer place.